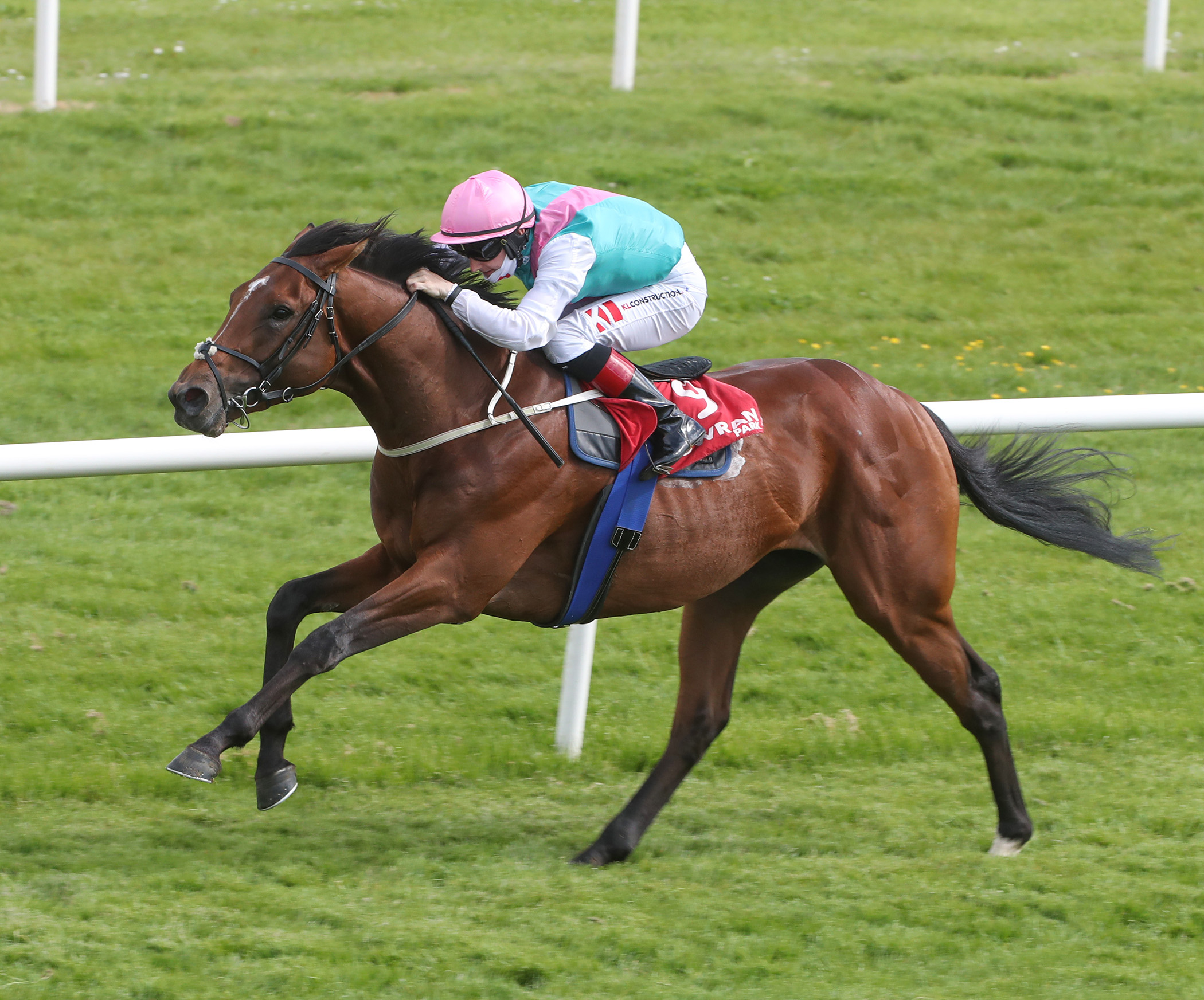 Lyons has Licence to Party in Plusvital Devoy Stakes at Naas

Naas will begin their Flat season on Sunday with an intriguing renewal of the Plusvital Devoy Stakes in which Group 1 Tattersalls Gold Cup entry Licence will take the next step of his career for trainer Ger Lyons.
Champion jockey Colin Keane will don the famous green, pink and white silks of Juddmonte as the Gowran Park maiden winner makes just the second start of his career in Sunday’s feature contest.

Licence will take on eight rivals, including his stable companion, Party House, who returns to the scene of her maiden victory.
The €40,000 Plusvital Devoy Stakes is the highlight on a bumper eight-race card at Naas on Sunday which will be day two of a Festival of Flat racing in County Kildare to mark the opening of a new season that kicks off at The Curragh on Saturday.
Speaking ahead of Sunday’s assignment for the potentially smart Licence, trainer Ger Lyons see’s the Plusvital Devoy Stakes as an ideal starting point.

“Licence has been a long time off the track. We have to start him at some point and I think it’s a nice place to start him. He doesn’t want extremes in the ground. He’s not an exciting horse at home, you wouldn’t learn a whole pile from him at home but his maiden, I don’t know what he beat, but he ran to about 90,” Lyons said.
“So he needs to improve but it’s a nice race to start him and we’ll be able to make a plan after that. He’s a horse we always liked but he wouldn’t impress at home so we’ll know more after Sunday.”
Lyons’ other representative is Party House who the Meath-based handler is hoping can bring her recent good homework to Naas this weekend.

“I thought she disappointed last year but she’s done well for the break. She’s got black type. She trains well but she has to bring it to the track. If she brings it to the track, happy days, if not she’ll go on her merry way somewhere else. But she’s training well and she’s ready to start.”

Speaking earlier in the week, Kate Harrington, assistant trainer to her mother, Jessica, was hoping that a return to Naas would see Barrington Court put in a bold display.
“She won two Listed races, the Bluebell Stakes and the Finale Stakes, in the space of three weeks Naas at the end of 2020 so we know she likes the track,” Harrington reported.

“We’re very, very happy with her. She’s flying and ready to go but we just wouldn’t want the ground to dry out too much.”
It looks a high class renewal of the race with the Joseph O'Brien-trained Patrick Sarsfield the highest rated in the line up with an official rating of 112.

O'Brien commented earlier this week: "He is a nice horse who won at Group 3 level in the past in the Meld Stakes at Leopardstown. He’s in good form. We are happy with him and we thought this would be an ideal opportunity to get him going. We are hoping that he’ll get his season off to a positive start in Naas on Sunday.”

Curragh maiden winner Cleveland missed last season but will return in the 10 furlong feature for Aidan O'Brien, while Henry de Bromhead's Jason The Militant is another strong contender.
The valuable Madrid Handicap has attracted a field of 11 three-year-olds with the weights in the €45,000 contest headed by the Ger Lyons-trained Markaz Panama and Aidan O'Brien's Leopardstown maiden winner West Coast while the consistent Navagio is also a notable runner for Johnny Murtagh.

There will be an added bonus for the winning breeder of four races on the Naas card this Sunday. Compas Stallions owner Micheál Orlandi will reward the winning breeder of each of their four sponsored races on the day with a free nomination to the named stallions of the race and the Compas Stallions Handicap winner will get a free nomination to a Compas Stallion of their choice.
Multiple Group 1 and Classic-winning jockey, Chris Hayes will join clerk of the course, Brendan Sheridan and general manager Eamonn McEvoy to take anyone interested on a walk of the track that is certain to be informative and enlightening. To register your interest for this unique opportunity, which is available free of charge and starts at 10.30am, mail [email protected].

At 12.15pm, Hayes will participate in The People Behind The Moment panel discussion In the Marquee along with local trainer Ross O’Sullivan, breeder Micheal Orlandi of Compas Stallions, who sponsor four races on the card, Johnny Bourke of Syndicates.Racing and Heather Downey, representing the event sponsors Equuip. Tea, coffee and sweet treats will be served
Throughout the day, jockeys will mingle and perform meet-and-greets particularly with children, as well as offering some guidance on the racehorse simulator and handing out goodie bags.

Transport
Naas are providing free shuttle runs from Sallins train station and Naas town before and after racing.