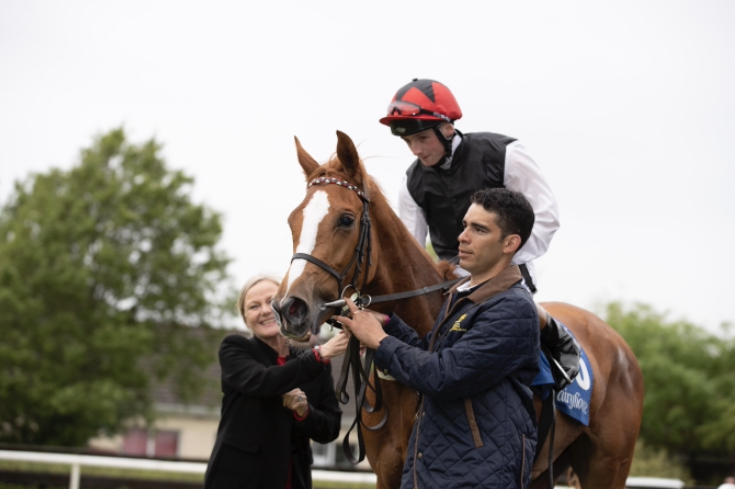 I’ve six rides to look forward to on a very entertaining card at Naas.

There is always a great vibe to the midweek meetings at Naas during the summer and with the weather promised to be good and Keywest playing afterwards I’m sure there’ll be a good buzz around.

It is also a starting point to Derby week and a big week in Irish racing.

I start off the evening on Natahoolababy for Noel Meade. Noel’s horses are in great form and I recently had my first winner for him. He had a two-year-old that ran a nice race at the weekend and Noel knows how to get them ready first time out.

My first ride with a solid chance would look to be No Nay Yellow for Fozzy Stack. We are drawn wide but I think the last couple of meetings have shown there isn’t much of a draw bias at Naas. He ran a good race at Fairyhouse on his first start. Greenness probably cost him but he ran with credit and I look forward to riding him.

Then I have Search For A Song in the Oaks Trial for Mr Weld. This is a beautifully bred filly. She was really impressive on her one and only start at Fairyhouse. The form of that race is working out well. It was a strong run maiden on the day and she was ultra impressive. She is the least experienced runner in a competitive field. Mick Halford’s runner sets the standard and Richard O’Brien’s filly ran well in the Guineas behind Hermosa but Search For A Song is a regally bred filly who I’m very excited about for the year. I’m hoping she can be what we think she is.

In the final race I ride Espoir Et Bonheur for the boss, Kevin Prendergast. The bosses horses are starting to run really well recently after a quiet start and this is a nicely bred filly so I’m hoping we can get her off to a good start.

Obviously I’m very much looking forward to teaming up with the boss and Madhmoon in the Irish Derby at the weekend.

He has come out of his run at Epsom in terrific form. He is one of 10 entries left in this morning. He’s in good shape, he is training beautifully and he has improved quite a lot from the Epsom run. That was a fantastic run and he lost nothing in defeat.

It was very frustrating he had that little stumble crossing the road which has been well documented but the Curragh is a far more stiffer, galloping track which should suit him. He hit he line quite good at Epsom so hopefully we put that stamina issue to bed there and it is going to be an exciting weekend.

Madhmoon is in against the battalion of Ballydoyle and we are flying solo but it would be marvellous if he could get his head in front.

The association I have had with the boss for the last 17 years has been unbelievable and he has been very good to me throughout. At 86, rising 87, it would be a lovely if the boss could land on an Irish Derby horse that was good enough to win the race. Hopefully he is and we are very much looking forward to it.

First up, we start at Naas however and fingers crossed with a bit of luck we might find a winner on the card and then be able to enjoy the music with Keywest afterwards. The team at Naas have obviously worked hard to transform these evening meetings into the full package and a real draw for local crowds and that is very important in racing these days.

A perfect start to a big week in Kildare and Irish racing.