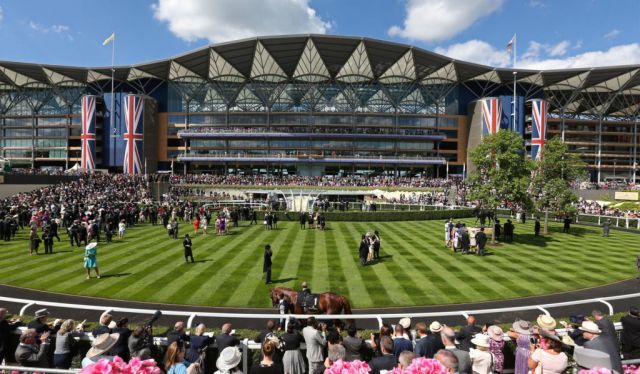 Naas Racecourse has joined with Ascot Racecourse in the UK in a bid to strengthen the links between the two racecourses and to further build on the fact that the Kildare track has long been regarded as the ‘nursery for the champions of the future’.

Naas Racecourse General Manager, Tom Ryan visited Ascot Racecourse for their inaugural Royal Ascot Trials Raceday (May 1st) where he met with the management of the famous UK track to officially mark the link between the two tracks.

A race named after Naas Racecourse also featured on the day, The Naas Racecourse Royal Ascot Trials Day British EBF Fillies Stakes (Class 3). The winner of the race was the John Gosden-trained Muchly who was aptly ridden to victory by one of Royal Ascot’s most successful jockeys, Frankie Dettori.

Tom Ryan said, “It was fantastic to meet all the team behind the wonderful meeting that is Royal Ascot and we are very proud in Naas of our Royal Ascot Trials Day which has continued to go from strength to strength in recent years. It was nice to mark that association with a race at such a high-profile meeting at Ascot today and it was somewhat fitting that John Gosden and Frankie Dettori would be the winning duo."

In a few weeks, Naas Racecourse will play host to the Royal Ascot Trials Day on Sunday, 19th of May when a race will also be named after Ascot Racecourse.  Ashley Morton Hunte, Corporate and Racing Communications Manager will be representing Ascot on the day and will present the prize to the winning connections.

The Royal Ascot Trials Day at Naas Racecourse is one of the feature race meetings within the Irish Flat season especially for those preparing for Royal Ascot glory. This meeting at Naas is the flagship flat race day of the year and the feature race is the Group 3 Goffs Lacken Stakes. The increased popularity of Royal Ascot in recent years and the corresponding need for preparation races have seen the importance of Naas increase significantly.

Speaking from Ascot on Royal Ascot Trials Day, Tom Ryan said, “For generations Naas Racecourse has quietly and consistently been a nursery for the very best race horses. Under both codes it has seen everything from Champion Hurdle, Gold Cup and Grand National winners on the jumping side to Guineas, Oaks and Breeders Cups. Naas Racecourse has enjoyed the support of Ireland's best trainers while being a regular choice for many of the UK’s leading handlers. We are delighted to partner with Ascot Racecourse and see this as a wonderful opportunity to further promote our track to a UK audience.”

Tom went on to say, “Coupled with significant infrastructural investment in recent years it has been the strengthening of Naas’s relevance to the Royal Meeting that has raised the international profile of the Co. Kildare venue. High quality colts such as Dawn Approach, Caravaggio, Sioux Nation and Kew Gardens have all won at Naas before success at the Royal Meeting. The fillies listing is equally impressive, Lillie Langtry, Sky Lantern, Winter, Quiet Reflection and Alpha Centauri. We are most certainly ‘The Nursery of Champion’s’ and offer people the chance to see some of the real superstars of the future.”

A prize worth over €8,500 and fit for a queen will be on offer for the Best Dressed Lady on Royal Ascot Trials Day at Naas on the 19th of May, with the winner granted an overnight stay with dinner in the Manor House at Palmerstown House Estate with 19 of her friends.  If that wasn’t enough, the prize also includes a €1,000 shopping spree in Kildare Village, home to some of the world’s most luxurious and exciting fashion brands.

Radio and TV Broadcaster, Lottie Ryan will lead the charge in the bid to find the best dressed lady on the day and she will be joined by racing aficionado, Orlagh Murtagh, wife of champion jockey, turned trainer, Johnny Murtagh.

Admission to the Royal Ascot Trials Day on the 19th of May is €15 per person.  Registration for Ladies Day is free of charge with registrations taking place in the Ladies Pavilion located beside the Parade Ring from 1pm-3pm. Those who enter the fashion competition will be treated to a complimentary glass of Pims.  Hospitality packages can be purchased online at www.naasracecourse.com