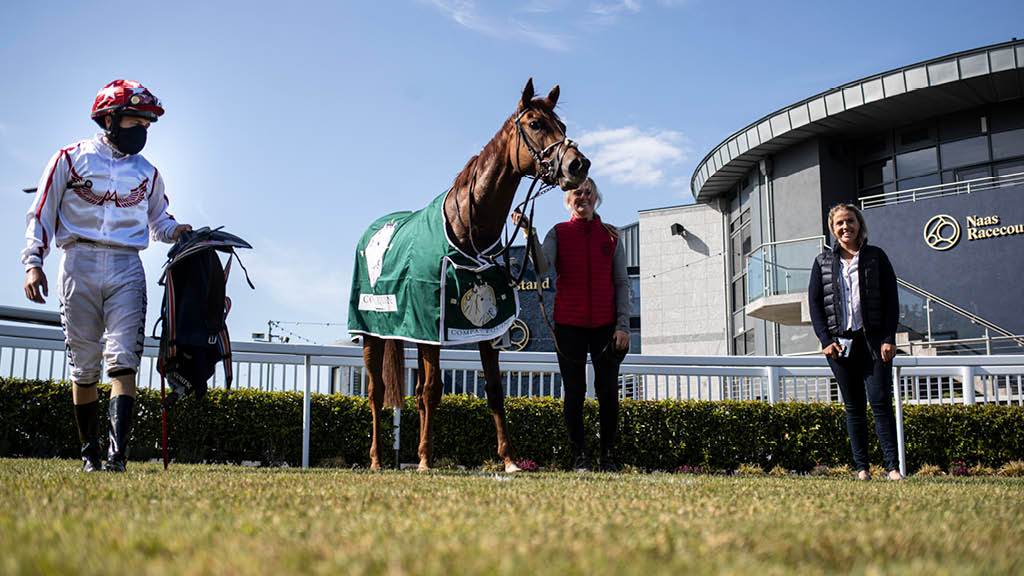 Naas Racecourse gears up for a Super Saturday of Racing with RTÉ to broadcast for the first time in over 30 years at the Kildare track on Saturday 20th June. Naas were the first track to host racing in Ireland on June 8th since the coronavirus shutdown. This Saturday the team set the stage for another race meeting behind closed doors with RTÉ broadcasting from 5pm-6pm.

RTÉ will show two live races, the Irish EBF Plusvital Polonia Stakes and the Sole Power Sprint Stakes. The remaining races will be pre-recorded and sponsored by the Irish EBF, the Irish National Stud and P&T Stapleton Sobac Soil.

Plusvital Irish EBF Polonia Stakes is the feature race on the day and has attracted 18 entries. In form trainer, Jessica Harrington is hoping her fine run will continue into this weekend and has three entries in the race including recent Naas Committed Stakes winner Punita Arora.

“Punita Arora has come out of her recent Listed win at Naas well and we’ve put her in the Polonia Stakes there on Saturday. The ground conditions suited her perfect the last day and we are hoping she can improve again. The plan at the moment is to run her on Saturday and come back to Naas again for the Group 3 Lacken Stakes in July. My other two entries For The Tree’s and Between Hills are both in good form and we will make a decision on them closer to the weekend”

Tango also heads 3 entries in the race for Champion Trainer Aidan O’Brien. She was impressive last season when winning the Irish Stallion Farms EBF Legacy Stakes at The Curragh. O’Brien’s other two entries are Precious Moments and Eden Quay.

Ciara Watt, General Manager of Plusvital commented: “I would like to take this opportunity to thank the team at Naas Racecourse and all our customers for their support over the last few months and wish everyone the very best of luck for the Listed Plusvital Irish EBF Polonia Stakes.”

The second listed contest on the card is The Sole Power Sprint Stakes, sponsored by the Lynam and Power Family. Denis Hogan will be hoping his other top sprinter, Make A Challenge can also come out on the right side of rivals Southern Horse and Sergei Prokofiev like stable mate Sceptical to give him another 5f winner at the track.

The two handicaps on the card are sponsored by Tom Stapleton of Sobac Soil. The rated Handicap has attracted 25 entries and an interesting horse to note is Gerard Keane’s runner Blametheshady, who went through Goffs sales rings for €150,000 as a foal in 2016. The Kodiac gelding has one win from one run.

The Irish National Stud have come on board to co-sponsor the Free Eagle Irish EBF Fillies Maiden. Some interesting newcomers are among the 23 entered in the maiden, including Elizabethan, a full sister to multiple group 1 winner U S Navy Flag.

Eamonn McEvoy, General Manager of Naas Racecourse said : “After a 30 year break, we are delighted to be welcoming RTÉ Television back to Naas Racecourse on Saturday and we hope this will be a trend to continue in the future.  I really enjoyed watching their work over the weekend from The Curragh, where, as ever their team gave great coverage to some top class racing.  Saturdays card will be very competitive with two high class listed sprints to compliment an array of handicaps and exciting maidens.”