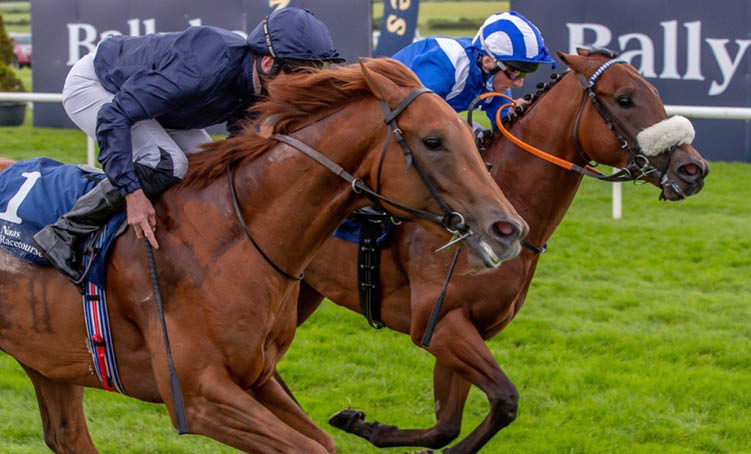 A maiden winner at Navan on the third day of racing’s post-Lockdown resumption more than two months ago, the Aidan O’Brien-trained colt had disappointed on a number of occasions in the meantime before catching the eye when coming home strongly behind Frenetic in the Listed Curragh
Stakes nine days ago.

The son of Air Force Blue relished the step up to six furlongs for the first time and needed every yard of it, his pilot getting his head in front right on the line to deny Monaasib and garner the €150,000 winner’s prize. Mooneista (Jack Davison) rattled home under Ronan Whelan to finish third.

“He was one of our Ascot horses and was impressive at Navan” explained Heffernan afterwards.

“The last day at the Curragh he ran out past the line, so I was coming here fancying him today.

“Today was his first try at six furlongs and he got it real well. There is a chance that he might get
another furlong and if he does, he’s got loads of speed to travel right.

Heffernan praised Ballyhane Stud for organising what is the largest prize fund in the history of Naas
Racecourse.

“Ballyhane Stud deserve a huge amount of praise not only for putting on this big race but also an €80,000 race. It’s massive.”

Murphy was one of 20 nominated Lockdown Heroes nominated by the general public and assigned a horse for the Irish EBF Ballyhane Stakes.

The 65-year-old has been the Co-coordinator at Tallaght Stadium's COVID-19 having brought together a team of volunteers to work in the Tallaght Stadium. During the last few months Murphy has gone from a 17 and a half hour working week up to in excess of 50 hours was described as "truly a lockdown hero" by Tricia Nolan who nominated him for the Naas initiative.

Courtesy of Chief Little Hawk's victory, Murphy will now enjoy a 4-night staycation at the Heritage Hotel, €2,000 cash and a luxury car from Colm Quinn BMW for two weeks courtesy.

Just as in the main event, every competitor’s connections were in receipt of prizemoney in the Silver Irish EBF Ballyhane Stakes, with the largest chunk going to Sweet Gardenia, who went off at 50/1 despite finishing just over four and a half lengths behind Chief Little Hawk in the aforementioned Curragh Stakes most recently.

The John Murphy-prepared filly found an extra leg on meeting the rising ground this time around, accelerating out of the pack to prevail very cosily by three and a quarter lengths from Notoriously
Risky.

“We’re delighted with that” said George Murphy, son and assistant to the victorious Upton-based
trainer.

“She was just a little bit green on her first couple of runs. She did that very well and Seamie said she’s well able for a step up in class and she felt like a group filly.”

That completed the treble for Heffernan after he had steered Passion to an uneventful pillar-to-post triumph in the Group 3 Irish Stallion Farms EBF Stanerra Stakes.

There was some consolation for Hayes for missing out on the feature as he guided Noel Meade-trained Layfayette to score in the Good Luck To Our 20 Lockdown Heroes Handicap, flashing home late to collar the unlucky pacesetter Wilderness in the shadow of the post, having had seven in front
at the furlong pole. Kevin Manning charted an outside course from off the pace to claim the opening Listed Owenstown Stud Stakes and provide trainer Johnny Feane with his first Stakes victory.