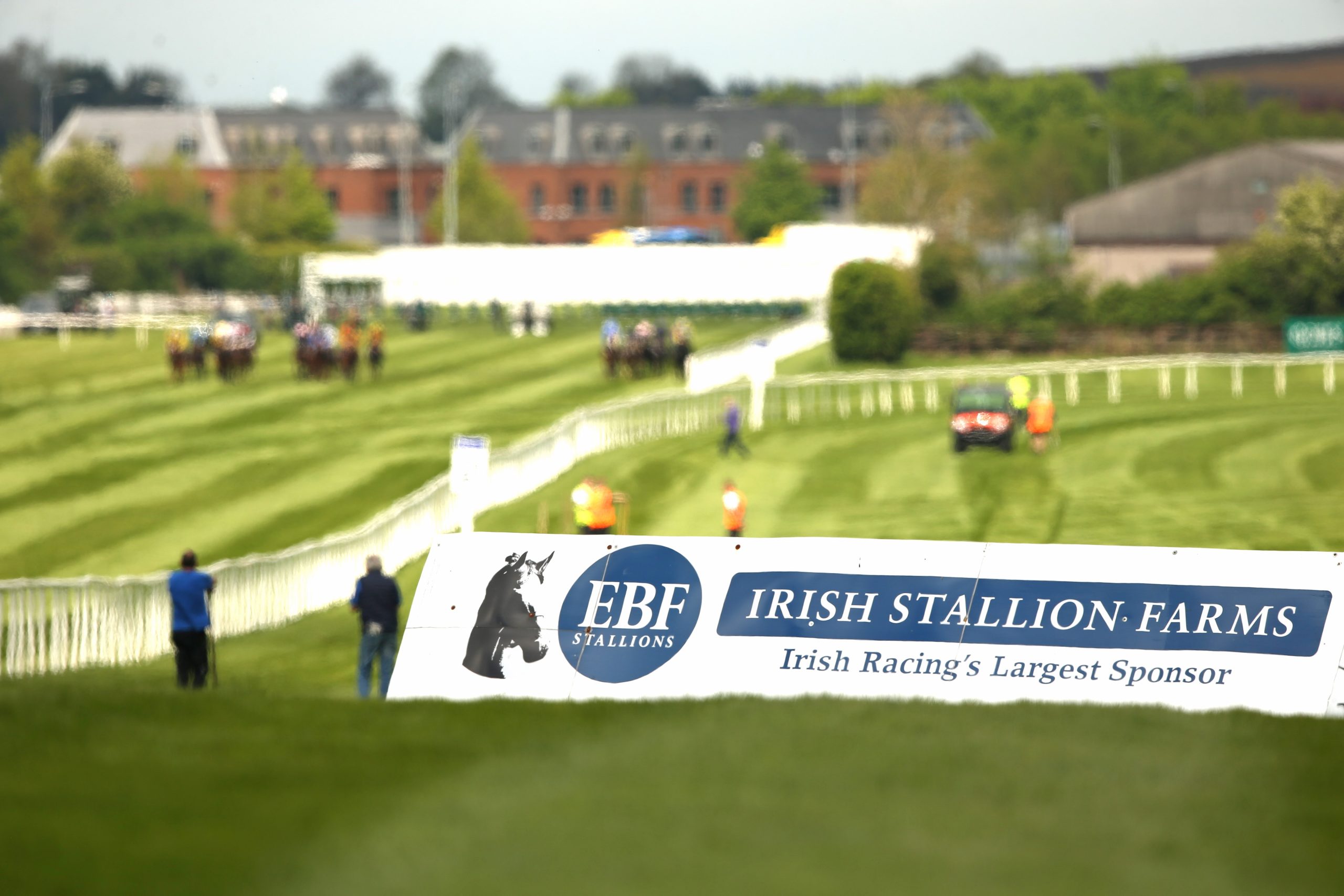 Panic Alarm is one of 15 declared runners for the Irish EBF Auction Series Final at Naas on Sunday.
Jessica Harrington’s son of Kuroshio is primed to contest the €120,000 feature in what has proven to be another fantastic initiative provided by Irish EBF for owners, trainers and Irish racing in general. The series itself began in 2015 and is open to EBF eligible two-year-olds purchased at auction for €72,000 or less. It boasts 27 races in total, comprising 25 qualifying races leading up to Sunday’s main final and nursery handicap, with weight allowances for lesser-priced entrants, and a total prize fund of €725,000.
This provides a considerable opportunity for connections purchasing horses at a competitive price to run for enhanced prize money right through the season, culminating in the final at Naas, with €72,000 going to the winner and prize money down to sixth place.
The average purchase price of the 15 finalists is just €20,653, while the lowest-priced went through the ring for only €3,000 and the most expensive cost €50,000, figures that are indicative of the opportunities provided by the series.

Panic Alarm was acquired for €20,160 but the winner of one of the qualifying races held this year when scoring at Down Royal last month has now accumulated €14,500 in prize money from two runs in the Irish EBF Auction Series and connections are hoping that he can add considerably to that bounty as the series draws to a close on Sunday.

The Harrington-trained Cloistered went down by just a neck in the 2016 renewal of the final and the Moone-based team are hoping to finally get over the line in the prestigious race. “The Irish EBF Auction Series is a very important series to our yard,” assistant trainer, Kate Harrington said on Friday. “We do try to aim horses a lot towards it. You have a series of races that you have potential of winning for horses bought for €72,000 or less. This final is a great opportunity to win big prize money later on in the season.
“Panic Alarm won very impressively at Down Royal the last day and the form of the race has worked out well. He’s progressive and has been aimed at the race ever since.”
Hat-trick seeking Lord Massusus is also among the declared runners. A Listowel and Curragh winner already in the space of the last month, the gelding earned €16,200 in the latter Irish EBF Auction Series contest, having been bought through the ring by breeder John Bourke for a mere €3,000 and holds a live chance in the Naas decider.

Speaking earlier this week, trainer Joe Murphy said: “We’ve always liked him. We were disappointed with his second run in The Curragh. I couldn’t get over it. But he bounced back after that winning in Listowel and he came out fresh so to qualify him for the final, we ran him in the six-furlong Irish EBF Auction Series race at The Curragh and he won that as well.
“The one thing he wouldn’t want is the two extremes – either very heavy or very firm. Anything in between is perfect. Good ground, yielding to soft is all fine but good horses don’t like extremes. If the ground got heavy I would question whether I’d run him and the weather is so changeable, it’s hard to know but we definitely want to run him. That’s the target.”

Joseph O’Brien is signalling his intent at landing one of the final six-figure prizes of the Irish Flat season by providing a third of the final field. The Pilltown conditioner will saddle Roaring Gallagher, Rubio Draco, Goa Gajah, Montesilvano and Wujdaan.

Former National Hunt jockey Kevin Coleman will enjoy the biggest success of his training career if Leopardstown victor With Love, his daughter of Territories, could land the big prize under Seamie Heffernan, while Naas winner Winemaker returns to the Kildare venue for Jimmy Coogan and Gavin Ryan, having already gathered €15,810 in prize money in the series, after being bought for a song at €3,000.

Noel Meade, successful last year with Lady Of Inishfree, has champion jockey Colin Keane retained for Encosta this year, a horse that has already accumulated €19,500 from three runs in qualifying races, including a Down Royal victory at the end of September, having been bought for €20,000. The Andy Oliver-trained Betterdaysrcoming is the mount of Keane’s championship rival Billy Lee and after triumphing at Naas, the €18,000 purchase has accumulated €19,000 in two qualifiers.

Meade and Keane also team up in the Irish EBF Auction Series Nursery with Leopardstown maiden winner Hasten Slowly who faces six rivals including Biggerthanbigtime (Pádraig Roche) and Alabama Pearl (Johnny Murtagh), who both were second last time out.
A full field of 20 runners is set to face the starter for the Listed Irish Stallion Farms EBF Garnet Stakes on the same card. The 108-rated Toy for Aidan O’Brien sets the standard but Gavin

Cromwell’s Sunset Shiraz, the Kevin Prendergast-trained Mehnah and Joseph O’Brien’s Emphatic Answer have all earned a rating of 100 and add intrigue.
The Ger Lyons-trained Yaxeni is the top rated of 13 runners in the second listed contest on the programme, the Irish Stallion Farms EBF Bluebell Stakes, while Johnny Murtagh has declared the talented One For Bobby in what looks a good renewal.

Naas Racecourse will also welcome recent Kildare Senior Football Champions, Naas GAA to their Panoramic Restaurant on Sunday for their club fundraiser and celebrations. The team retained the Dermot Bourke Cup for a second year in a row last Sunday in the county final against Clane. For more information or to support contact [email protected].
First race is off at 1.10pm and admission and hospitality tickets can be bought at naasracecourse.com.