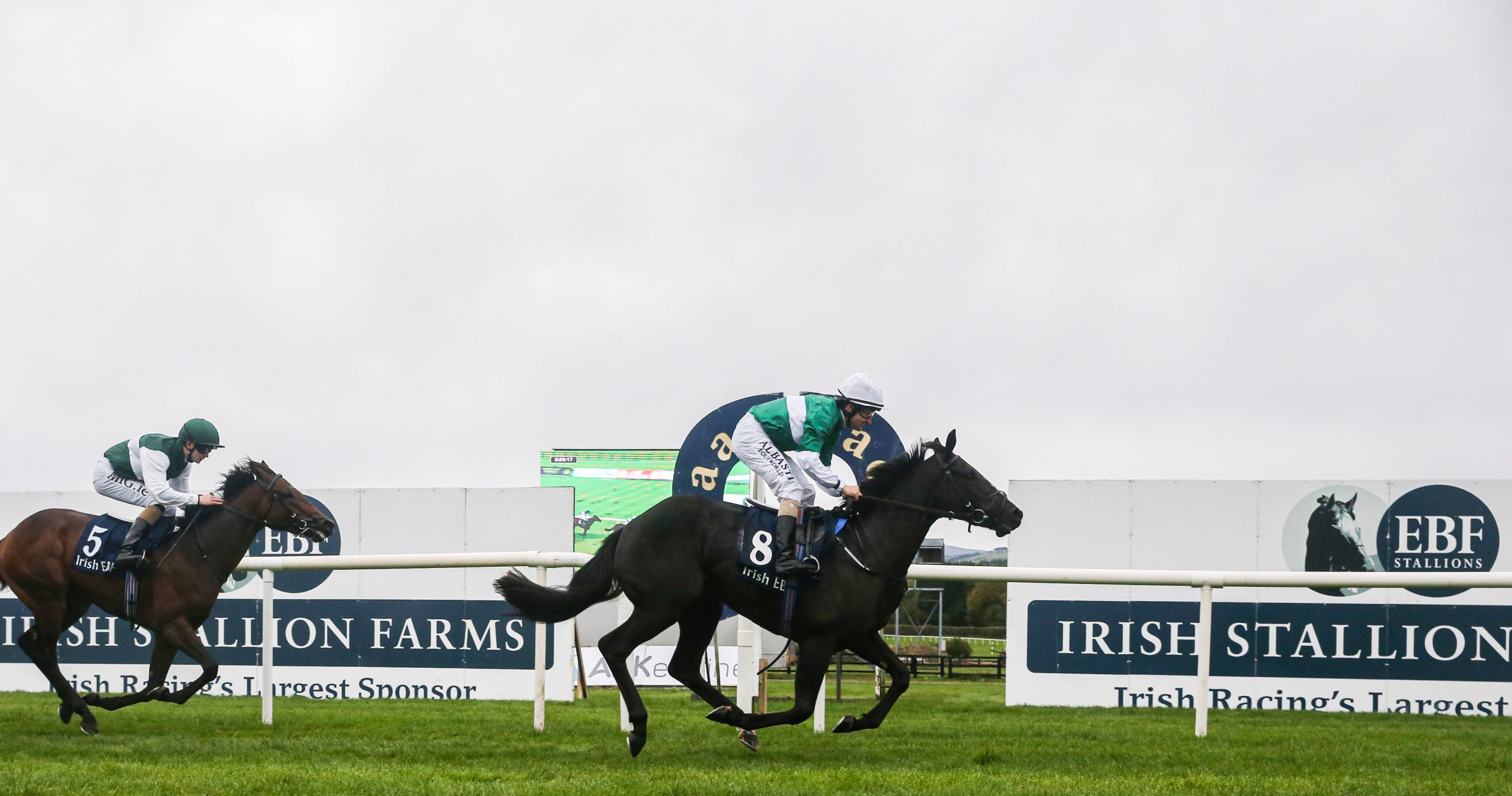 Winning trainer Jessica Harrington and Michael Donohoe, representative of successful owner Hronis Racing, have extolled the virtues of the Irish EBF Auction Series, which concluded with yesterday’s Final and Nursery Handicap at Naas.

Shane Foley delivered Panic Alarm to swoop to a two-length triumph in the Final, scoring €72,000 in the process, having cost 18,000 guineas (€20,160) at the Tattersalls Ireland Yearling Sale at Newmarket last year.

The Irish EBF Auction Series Nursery Handicap was won by the Ado McGuinness-trained Lisieux for Shamrock Thoroughbreds, pocketing the €18,000 first prize at the expense of stablemate Distillate two and a half lengths back in second.

For Sunday's feature finale, the average purchase price of the 15 finalists was just €20,653, while the lowest-priced went through the ring for only €3,000 and the most expensive cost €50,000, figures that are indicative of the opportunities provided by the series.

Panic Alarm was acquired for €20,160 at the Tattersalls Ireland September Sale last autumn and the son of Kuroshio has accumulated €86,500 in prize money from three runs in the Irish EBF Auction Series.

Prize money was available in both the Irish EBF Auction Series Final and the Nursery Handicap down to sixth place, the Joseph O’Brien-trained, Thoroughbred Racing Syndicate-owned Rubio Draco earning €2,400 for taking that position in the final.

Since its inception in 2015, the Irish EBF Auction Series has gone from strength to strength with Ireland’s largest sponsor, Irish EBF the constant driving force. Open to EBF eligible two-year-olds bought at auction for €72,000 or less, it boasts 27 races in total (25 qualifying races, the Final and the Nursery Handicap) with weight allowances for lesser-priced entrants, two finals and a total prize fund of €725,000.

This provides a massive opportunity for connections purchasing horses at a competitive price to run for enhanced prize money right through the season, culminating this year in the €120,000 final at the Kildare venue.

Michael  Donohoe, representing Hronis Racing but also one of the industry’s foremost bloodstock agents, emphasised how it has prompted increased activity in the middle market at the sales.

“A lot of the time we would specifically identify yearlings to run in these races so it’s a great initiative.”
Jessica Harrington has certainly increased her roster of owners on the Flat in recent years and has been a keen supporter of the series since its inception.

Harrington saddled Cloistered to be a narrow second in 2016 and Ms Brinkleys was also runner-up in the final a year previously. The Moone-based trainer has had a runner in every renewal with the exception of 2017 and is a massive supporter of the programme of races involved.

Harrington said: “It’s a wonderful pot in the final but also the lead-in races that you run in to qualify for the final have nice pots as well, if you win your maiden. I just think it’s a great series, a great incentive and it’s a great way of getting owners into racing and thus attracting new owners.”

She added: “There’s plenty of opportunity and a great incentive and it does encourage people to buy horses at the yearling sales.”

Ado McGuinness took the lion's share of the €30,000 prize money on offer in the final race of the series races, the Irish EBF Auction Series Nursery Handicap.

Lisieux picked up €18,000 when she finished well to pick up stable companion Distillate, who earned €6,000. With Lisieux costing just €10,000 at Tattersalls Goresbridge Breeze-up sales in May and Distillate being bought back for €4,000 in the Goffs February Sale, the value this Irish EBF series offers is obvious to all in the game.

The Irish EBF Auction Series is part of Irish EBF’s designated programme to incentivise activity at all levels of the yearling sales and provide opportunities for two-year-olds bought in the lower-to-medium range to run for a staggering €1.65 million in prize money.

Included in that programme is the Irish EBF Median Sires Series, which began in 2020 and is open to two-year-olds by sires with an established median auction price of no more than €75,000 and boasts a prize fund of €625,000. There are 26 races, with weight allowances for two-year-olds by a sire with a lesser median price.

The €300,000 Irish EBF Ballyhane Stakes is the showcase for the Median Sires Series and is run at Naas on the August Bank Holiday, the richest race to be run at Naas.