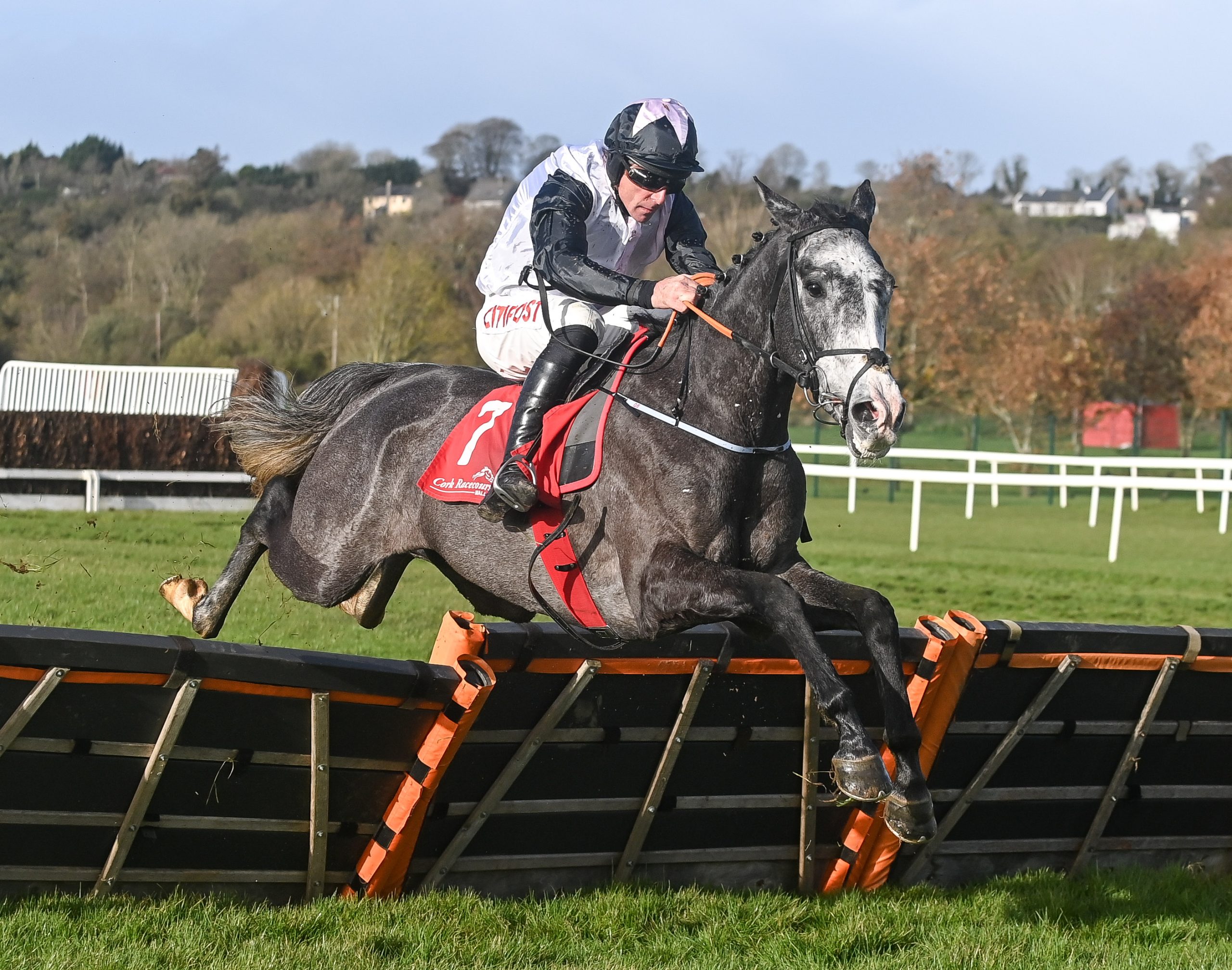 Having won the Grade 1 Lawlor’s Of Naas Novice Hurdle four times since 2017, it is no surprise Gordon Elliott is once again well represented for Sunday’s high-class renewal.
The Meath-based conditioner landed the opening Grade 1 of the calendar year with Death Duty in 2017 and since with Battleoverdoyen, Envoi Allen and Ginto and Irish Point spearheads the Cullentra challenge this weekend.

Irish Point, who will be ridden by Jack Kennedy, is a smart recruit to Elliott’s team, having begun his career in France, and was narrowly denied in the Grade 1 Royal Bond Novice Hurdle at Fairyhouse last month on just his second outing over hurdles.
Joining Irish Point in the nine-strong field is stable companion Imagine, who has lost little in defeat when second in strong company on his two latest starts and will be partnered by Jordan Gainford.

“We have declared Irish Point and Imagine for the Lawlor’s Of Naas Novice Hurdle on Sunday and we’re looking forward to it,” confirmed Elliott.
“This is a race we have a circle around every year as you need to have a nice horse to run in it and thankfully it has been lucky for us over the years. It comes at a perfect time of the season and it is always nice to try get a big winner early in the year.

“Irish Point is a lovely horse. He did everything well on his first start for us at Cork when he won his maiden hurdle and then he went to Fairyhouse for the Royal Bond and just got beat. You are always disappointed when you don’t win but we were still delighted with the run for only the second start over hurdles so hopefully he learned a bit that day and can give a good account of himself at Naas on Sunday.”

Elliott added: “Imagine is in good order since his last run and we couldn’t be happier with him at home and deserves to take his chance in this calibre of race. We are really looking forward to it, it’s a top-class race every year at a great meeting.”

McManus appears to have two very talented novice hurdlers carrying his famous colours with both Dawn Rising and Inothewayurthinkin declared.

Dawn Rising, the mount of JJ Slevin, is a son of Galileo who has made the perfect start to his jumping career since joining the red-hot Joseph O’Brien from his father Aidan, while Inothewayurthinkin, who will be ridden by Luke Dempsey, is also two from two over flights for Gavin Cromwell. Frank Berry, racing manager to McManus, said earlier this week: “I don’t think ground will be any issue anyway and we wouldn’t be making excuses in that regard for either of them.

“They’re both nice horses and they’ve been both doing their job nice and grand but this is a different level and we’ll how we’re going afterwards. We’ll know a lot more about them after this Grade 1, which always throws up a good winner and that’s the nature of racing in Ireland at this time of the year.”The Noel Meade-trained Affordale Fury, Sean Doyle’s Monbeg Park and the locally-trained Kalanisi Star for in-form Oliver McKiernan complete a vintage renewal.
Earlier on Sunday’s card, racegoers will be treated to 2021 Supreme Novices’ Hurdle winner Appreciate It taking on four rivals in the Rathmore Stud Irish EBF Novice Chase.
The historic Rathmore Stud is providing its support to the Irish EBF Novice Chase, won in 2020 by Energumene, now the supreme two-mile chaser on the planet, and last year by Blue Lord, who also went on to be a multiple top-flight winner since prevailing in the Naas test and ranks as a genuine challenger to his stablemate for Champion Chase honours next March following his Christmas Grade 1 romp at Leopardstown.

Indeed, since 2016, only one victor of the EBF Novice Chase has not gone on to win or be placed in a Grade 1 that season.
Rathmore Stud is run by Peter Molony, whose family connection with the farm goes back to the late 17th century. The stud has established a reputation for dealing in quality Flat and National Hunt bloodstock with Honeysuckle, Bobs Worth, Sir Gerhard and Telmesomethinggirl among its stellar graduates.

The concluding National Hunt Flat Race will be sponsored by the Fifty Stars Syndicate and will carry the name of Fifty Stars, the 121-rated Group 1-winning son of Sea The Stars standing in partnership with Bloodstock Racing at Sunnyhill Stud in Co Kildare.

As well as his success in the Group 1 Australian Cup, when he defeated six previous top-flight winners, Fifty Stars bagged nine other victories, with his wins coming in distances ranging from seven to ten furlongs and in five group races in total.

The race is the first four-year-old bumper of the year in Ireland and has often attracted high class horses with Dermot Weld represented on Sunday by Sattam, while Jamie Codd and Gordon Elliott team up with Ankud.

Naas Racecourse will be hosting a Best Dressed Lady competition on he day with a prize fund of more than €3,000. Kids’ entertainment and a free creche are on offer while live music will also be played throughout the day by the Rolling Tones Vinyl Van DJ.

Tickets are available on naasracecourse.com