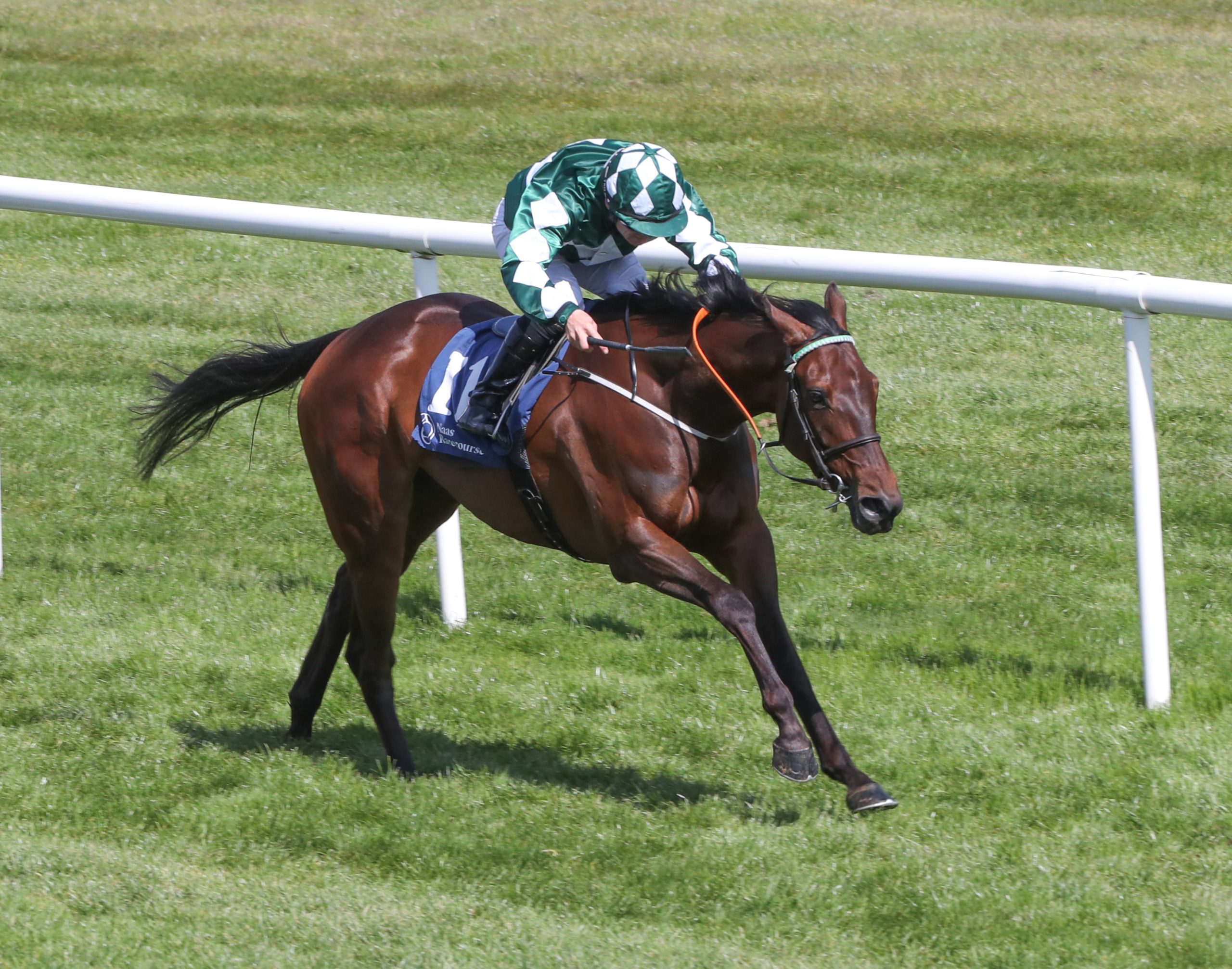 Davison reaching for the stars at Naas

Mooneista leads the pack of 18 horses that stand their ground in the Group 3 Tally-Ho Stud Irish EBF Ballyogan Stakes, which takes place at Naas on Sunday.
Trainer Jack Davison reports the filly to be thriving but will not make a definite decision on her participation until closer to the weekend, keeping a particular eye on the weather.
The top-rated filly by some distance at 112, the daughter of Dandy Man is well treated by the conditions of the race.

Bred by his parents and running in the colours of his mother Paula, Mooneista is the family pride and joy. The four-year-old has yet to get her head in front this season but has been second twice, including in two Group 2 contests. The most recent of those was a short head runner-up finish in the Sapphire Stakes at The Curragh last month, a race she won 12 months ago.
Her only time outside the top three in five runs, all in stakes class, was a fantastic fourth in the Group 1 King’s Stand Stakes at Royal Ascot.

“Everything’s A1 with her,” said Davison this afternoon. “I’m going to wait until I have to decide as I want everything to be right for her because we have some big plans for the end of the season, with the Group 1s in the likes of the Flying Five and the Breeders’ Cup.

“She’s 15 kilos heavier than she was after the King’s Stand so we’re sitting pretty at the minute. She’s just that bit better with the slower ground and we haven’t gotten the rain we might have expected. If we had a deluge coming on Friday and Saturday, the needle would swing in favour of us running. We’ll just have to see.

“She could as easily have four wins beside her name but she gives 100 per cent every time she goes out and we just need the bounce of the ball on the day.” .

Johnny Feane’s progressive Ano Syra is an interesting contender, potentially facing into her ninth race of the year and chasing a fifth win. A course and distance winner in April, the three-year-old Kodiac filly has since added two more handicap victories over the minimum trip. After starting in January rated 73, Ano Syra is now 103 after finishing second at Group 3 level 10 days ago.
Ger Lyons’s duo, Sacred Bridge and Pirate Jenny, are both previous six-furlong winners at Naas, the former having scored twice there as a two-year-old, including when triumphant in the Irish EBF Ballyhane Stakes before adding Group 3 honours to her CV. However, she was behind her stablemate in the Listed Yeomanstown Stud Irish EBF Stakes at the track in July.

Sablonne split the pair on that occasion and is Jessica Harrington’s sole possible contender, with Ken Condon’s 100-rated Listed winner Teresa Mendoza also a potential runner.
Unsurprisingly, given that there have been nine British-trained winners since 2000 and with the added incentive of an automatic free entry into the Group 1 Flying Five Stakes on Longines Irish Champions Weekend on offer to the winner, seven cross-channel trainers remain tempted: Patrick Owens (Adaay To Remember), Richard Fahey (Ventura Diamond), Clive Cox (Benefit), William Haggas (Perfect News), Charlie and Mark Johnston (Tippy Toes), Adrian Nicholls (Mo Celita) and David Loughnane (Group 2-winning juvenile Hello You).
Joseph O’Brien has left in Night Of Romance and Camdeboo and the list is completed by Aidan O’Brien’s Prettiest, the Sarah Lynam-trained Goodnight Girl and My Eyes Adore You, from the Fozzy Stack barn.

Tally-Ho Stud are long-standing sponsors at Naas and have extended the partnership by becoming title sponsors of the Tally-Ho Stud Irish EBF Ballyogan Stakes and also supporting the Inns Of Court At Tally-Ho Handicap.

A total of 11 runners could contest the 1m2f Wesco Electrical 50th Anniversary Race, with Wesco Electrical added as new members to Naas Racecourse’s roster of sponsors and celebrating their Golden Jubilee.

In all, there are seven races, with the horses going to post for the opening Irish EBF Median Sires Series Fillies’ Maiden at 2.30pm.
The Family Fun Day promises free activities such as bouncy castles, bungee trampolines, face painting, magic show and more. Family admission for 2 adults with kids €25 at naasracecourse.com.

Six in the mix for Meade in pursuit of more €120,000 Irish EBF Auction Series Final glory