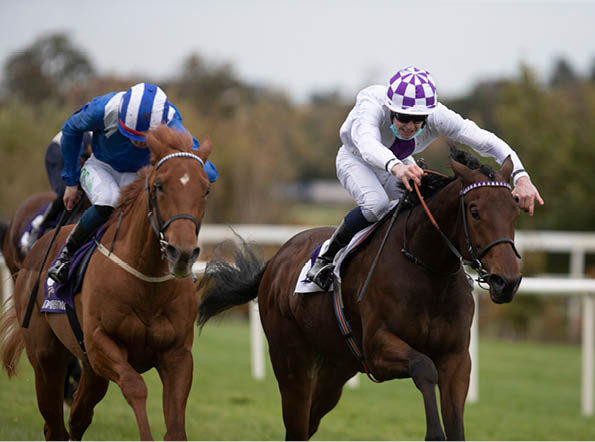 The Tally - Ho Stud Irish EBF Birdcatcher Premier Nursery has attracted a strong field this Saturday on the closing meeting of the Irish flat season. The field of 11 runners is headed by Jim Bolger’s Group 3 Eyrefield Stakes winner Flying Visit.

Ken Condon is hopeful of finishing off a fine season for the team with a big run in Ireland's most prestigious nursery from the consistent Colfer Kay. The daughter of Pride of Dubai was third over course and distance before going to break her maiden at Navan last month.

Condon said on Thursday; “Colfer Kay got rewarded for her consistency with a victory at Navan last time out. It’s her first run in a handicap but hopefully she has a fair mark and can be competitive. She remains in good form.”

Whilst there won’t be an official prize giving ceremony the flat season champions will be named on Saturday when Naas draw down the curtain on the Irish flat season. Aidan O’Brien, Colin Keane, Gavin Ryan and Mrs Sue Magnier will be named champion trainer, jockey, apprentice jockey and owner respectively.

Eamonn McEvoy, General Manager of Naas commented: “We are delighted here at Naas to again be closing off the turf season albeit in such strange circumstances. I would like to congratulation the champions on the achievements. It is unfortunate the celebration of such worthy champions will have to be put on ice. I would also like to congratulate all the divisional winners for their constant and intense determination throughout the season. We are delighted with the entries for Saturday’s card, I had hoped Mr Bolger would declare recent G3 winner Flying Visit in the Tally-Ho Stud Birdcatcher so am very happy to see him in the line-up.”

Along with the Birdcatcher, Tally - Ho Stud will also sponsor the Mehmas Handicap after their record breaking first season stallion. Eddie Lynam and Tide of Time will bid to take the 5f contest for the second year running.

The November Handicap is another valuable race on the card this Saturday and trainer Karl Thornton is hoping his inmate Shanroe can deny top weight to take the spoils. The dual purpose performer hasn’t been placed out of the first two on his last five starts which suggest that similar riches can come his way on this level. Shanroe will take on 15 other rivals including last year’s winner Jukebox Jive for the Gavin Cromwell stable.

Jessica Harrington will be hoping for a big weekend at the Breeders Cup and will also bid to get a win on the last day of the season at home in the Listed Naas Racecourse Business Club Finale Stakes with impressive performer Barrington Court. The dual purpose mare will take on a competitive field of 14 including Numerian for the Joseph O’Brien Stable and Red Kelly for Johnny Murtagh.

Thank You Sobac Soil.ie Healthy Grass Maiden has attracted 11 runners. Dermot Weld and Oisin Orr will be hoping to finish off the season with a win with Cannoli. The Oasis Dream filly finished a good second on her last start at Galway and will be hoping to go one place better.

“We are fortunate to have such fantastic support from our sponsors Tally-Ho Stud, Sobac Soil, the Irish EBF and the Naas Racecourse Business Club. We are delighted to continue our partnership with the O’Callaghan family and congratulate them on having another successful year with Mehmas entering the history books when he became the most successful European first season sire in history. Saturday’s sponsorship will be Sobac Soil’s sixth out of seven races to sponsor since November 2019 across a number of racetracks, this is exceptional support from Tom Stapleton during this challenging times for racetracks.” Commented Manager Eamonn Mc Evoy.