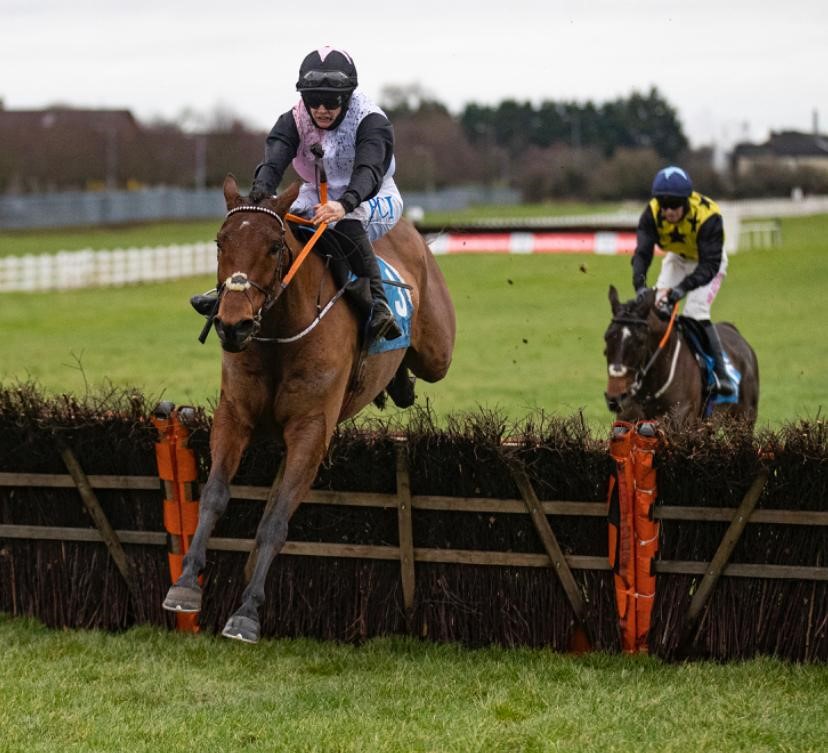 Bob’s your uncle for de Bromhead and Blackmore

It was a double delight for the red-hot team of Henry de Bromhead and Rachael Blackmore at Naas, with the highlight being the resounding victory of Bob Olinger in the Grade 1 Lawlor’s Of Naas Novice Hurdle.

The son of the Rathbarry Stud housed Sholokhov had followed up an eye-catching debut second over just two miles to Champion Bumper winner Ferny Hollow, with a facile maiden triumph when stepped up to two and a half at Navan and the 6/4 favourite confirmed his class with a six-and-a-half-length triumph over the Willie Mullins-trained Blue Lord, with Gavin Cromwell’s Gabynako keeping on for third having made the running.

Blackmore, who brought her tally for the season to 67 winners, shadowed Paul Townend throughout as the champion battled to keep a lid on the ultra-keen Blue Lord. In contrast, Bob Olinger was expending no more energy than required and when Townend kicked for home turning in, he was quickly joined by Bob Olinger who responded impressively to a tap down the neck.

The Robcour-owned six-year-old had moved a couple of lengths clear when spring-heeled at the last and most impressive in testing going was the manner in which he sprinted all the way to the line to prevail by six and a half lengths from a rival who clearly has his own bright future ahead of him.

“I’m delighted for Brian Acheson and Robcour,” said Blackmore. “He puts a lot into this game and it’s great that he gets rewarded with a Grade 1 winner and a horse like that for the future.

“I was just going to ride a straightforward enough race on him. He’s a simple horse to ride in that sense. I was happy most of the way.

“He jumped better today in the latter half of the race (than at Navan). The jump is there from him if you really ask him. It’s brilliant to get that under the belt.

“Everyone’s always thought a lot of this horse. Davey Roche rides him out at home and liked him a lot from day one. Patrick Mullins won a bumper on him, Pat Doyle won a point-to-point with him. He’s been very consistent. Anyone who’s been involved with him has liked him. Today was the big test.

“He was more professional today than he ever was I suppose. I don’t think he’s a real sharp Champion Hurdle horse in the making. Two and a half is ideal for him either. I wouldn’t rule out two either but the future he’s probably going to be a horse for the longer trips.”

The de Bromhead-Blackmore tandem were celebrating a quick double, a little over half an hour after Epson Du Houx had prevailed in the Eastcoast Seafood & Gouldings Handicap by six and a half lengths from the Ciaran Murphy-conditioned Jack Hackett.

The Gigginstown House Stud-owned gelding pulled clear impressively when taking up the lead approaching the penultimate obstacle from the fading Yaha Fizz, quickening up well and clearing the last with ears pricked to suggest that there may be bigger targets in store.

The duo had to give best to the Mullins-Townend machine in a high-class Irish Stallion Farms EBF Novice Chase however, as Captain Guinness had no answer to the foot-perfect jumping and finishing burst of Energumene (10/11f).

Townend, who hit the 70 mark for the season, dictated throughout and his unexposed seven-year-old partner now has numerous options having added this two mile success to the impressive win over a half mile further at Gowran Park in November.

“I was very happy with it. He jumped electric again. I didn’t see many of the other rivals but with the noises coming off the fences, I thought I had them in a bit of trouble behind me. He settled it quick when Rachael’s joined me in the straight.

“It’s very heavy ground and that was going to bring stamina into play but to be honest, the way he jumps, I think he could jump at any trip. He’s not a tearaway or anything. If they wanted to go on we’d have taken a lead. I think he’s versatile enough. I don’t think he’s a slow horse either. He’s exciting.”

Mullins would later combine with Townend’s sister Jody for another all-the-way victory in the concluding Rushe’s Supervalu Flat Race to complete his personal double, the rider electing to go on with Belle Metal (9/4f) when there was no early pace and keeping more than enough up her sleeve to run out an easy winner.

Joseph O’Brien and JJ Slevin continued their recent rich vein of form in the opening Irish Stallion Farms EBF Mares’ Beginners’ Chase when well-backed Miss Pernickety justified the 8/15 to take up the lead from the tiring long-time trailblazer New Money just before the last and score by five and a half lengths.

On Eagles Wings (2/1) bagged the INH Stallion Owners EBF Maiden Hurdle for Timmy Hyde and his grandson Harry Swan, who was emulating both his grandfather and legendary father Charlie by winning on his first ride over hurdles.