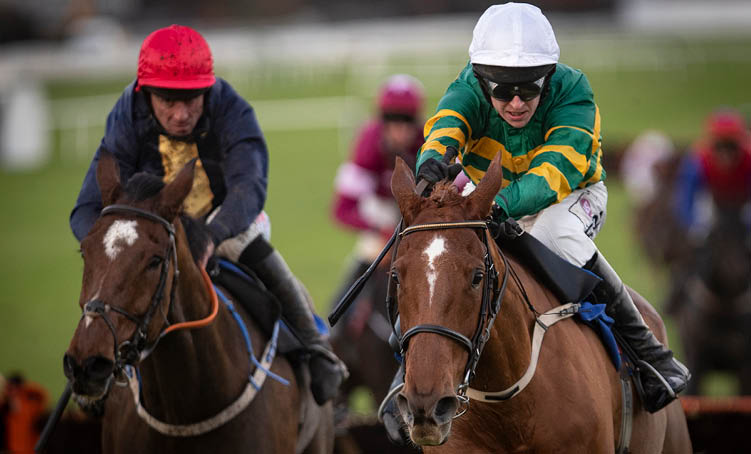 Cheltenham Festival winning trainer Martin Brassil will be hoping to unearth another potential leading novice hurdler as Longhouse Poet features in a field of seven for the Grade 1 Lawlor's Of Naas Novice Hurdle.

Brassil landed the Ballymore Novices' Hurdle at Cheltenham last season with City Island and carrying the same colours of Sean and Bernardine Mulryan, the Curragh-based trainer appears to have another smart prospect on his hands in the shape of Longhouse Poet.

Longhouse Poet will be aiming to lower the colours of the unbeaten Envoi Allen in what looks a stellar renewal of the Lawlor's Of Naas Novice Hurdle and Brassil is hopeful of a good showing from the six-year-old.

"Longhouse Poet won his maiden nicely and he is probably going into the deep-end a little in a Grade 1 against experienced horses," Brassil said. "The trip will suit him and we'll find out his level on Sunday.

"Naas is a good honest staying track and he seems to be that type of horse that wants two and a half miles and a track like Naas."

Envoi Allen will once again be ridden by three-time champion jockey Davy Russell and the Cork native spoke of his fondness for the Champion Bumper winner earlier this week.

"Envoi Allen is a big strong horse with a lot of ability. Gordon has done a fantastic job with the horse and everyone seems happy with him at home,” Russell said.

“His form is rock solid and we are really happy with him. It’s a pleasure to be around him.

“Naas is a very good racecourse and a tough racecourse so you need a very good horse to win around there. I have no doubt that Sunday will be a true test,” he added.

Gordon Elliott will also run Conflated in the opening Grade 1 of the calendar year, while Joseph O'Brien is also double-handed in the race as he has declared Midnight Run and the highly progressive Anything Will Do.

This will be the sixth renewal of the Lawlor's Of Naas Novice Hurdle as a Grade 1 contest and Willie Mullins has won three of them with Mckinley, Bellshill and Next Destination and his sole representative on Sunday is the JP McManus-owned Elixir D'ainay.

Elixir D'ainay is a course and distance winner having defeated Longhouse Poet in a maiden hurdle back in November.

The field of seven is made up by the highly regarded French Dynamite who seeks to follow up a Point to Point victory and a winning racecourse debut at Thurles by giving trainer Mouse Morris a third win in the race. Morris enjoyed success with Venalmar in 2008 and subsequent Grand National winner Rule The World in 2013.

Robbie Power rides French Dynamite and commented: "This looks a very good race but French Dynamite was impressive when he won his maiden at Thurles and I'm looking forward to sitting on him again as he steps up in class.

"He is a Point to Point winner so I think the extra distance at Naas on Sunday will suit him well," Power continued. "Envoi Allen would look to be the one we all have to beat but French Dynamite is a lovely horse and this will give us an idea of where we go for the rest of the season with him."

Elsewhere on the seven race card, Grade 1 winner Tornado Flyer will look to continue his winning sequence over fences when heading a field of six for the Irish Stallion Farms EBF Novice Chase. The first race is due off at 12.50pm and Sunday is also Winter Ladies Day and Family Fun Day at Naas with a magic show taking place in the Creche from 1.30pm. Further details are available at www.naasracecourse.com.