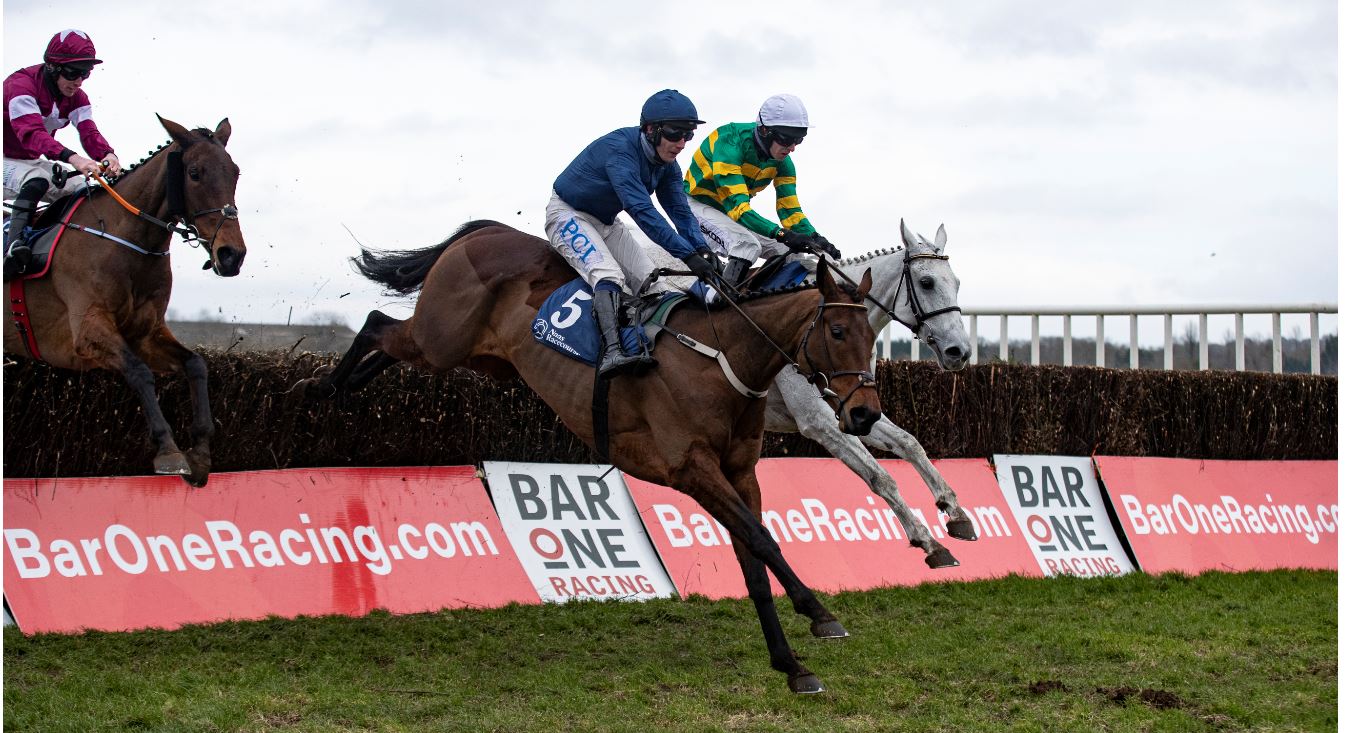 A grand total of 54 horses have been entered for the €80,000 BARONERACING.COM Leinster National Handicap Chase at Naas Racecourse on March 14th.

It is a fittingly strong line-up for the first year of an initial five-year deal that will see Bar One Racing sponsor the six supporting races on the card, including a pair of Grade 3 contests.

One of the country’s leading independent bookmaking firms, the Louth-headquartered company has proven a valuable backer of Irish racing by beefing up its sponsorship portfolio considerably, and the Leinster National is the latest string to its bow.

Champion trainer Willie Mullins boasts 14 of the potential competitors, including Syndicates Racing’s Kerry and Munster National heroine Cabaret Queen, Brahma Bull, Robin Des Foret, and Class Conti, who relished the stamina-sapping conditions when a five-and-a-half-length third in the Thyestes Chase at Gowran Park on his last outing at the end of January.

The Closutton maestro took the spoils most recently in 2019, when Pairofbrowneyes and Paul Townend combined to land the first prize for the second consecutive season, leading home a Mullins 1-2-3 in the process.

JP McManus is the most heavily represented owner with 13 entries, including the top-rated Any Second Now, who is trained just a piece of work from Naas in Kill by Ted Walsh.

The former Cheltenham Festival winner (claiming the Fulke Walwyn Kim Muir Challenge Cup in 2019) has track form too, as a victor of the Grade 3 WhatOddsPaddy? Chase 12 months ago.

Another Kildare trainer overseeing the preparation of a pair of possible McManus runners is Carbury man, Philip Dempsey.
Ten Ten and The Long Mile proved their wellbeing with strong showings at the weekend and would be expected to make bold bids if lining up.

“Ten Ten and The Long Mile both ran at Fairyhouse on Saturday and ran very well, finishing second and third respectively. I was very happy with them,” said Dempsey.

“We will have to see how they come out of that before making any plans for the future but they have been entered so the BARONERACING.COM Leinster National is an option. We will look at how they are in the next few weeks before deciding where they might go next.

“I’ll be honest with you, I enjoy a winner no matter what part of the country it is but it’s always nice to have one in Naas as a Kildare man and this would be a nice race to be represented in.”

John McDonnell Communications Manager at Bar One commented: "We are delighted to see a strong entry for the Leinster National. There's a nice blend of unexposed types like Mr Hendricks and Lord Royal, and we've also got the experienced regular in this type of race. It's good to see a real spread amongst the trainers with entries too. The large entry indicates we should have a maximum field on the day, and that should ensure a strong betting race. We are looking forward to what should be a superb day of racing."

Click here to see entries for the BARONERACING.COM Leinster National