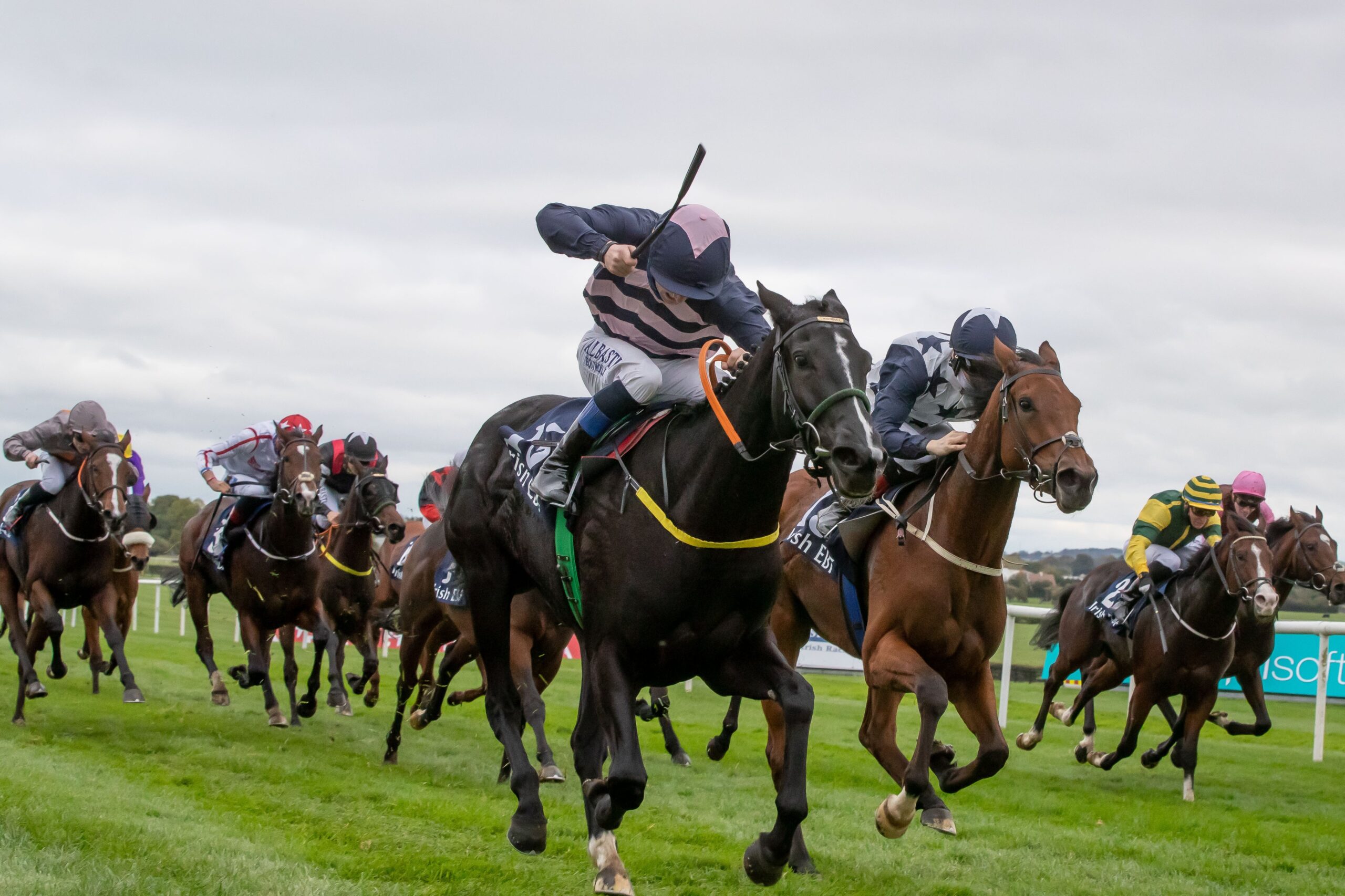 A supporter of the series since its inception in 2015, Meade has already invested heavily in yearlings for next year’s renewal.
Buoyed by their principal share of the €72,000 first prize from the Naas final, owners Eoin Banville, Ken Bolger and Peter Parkhill are also intent on being involved again in 2022.
As dedicated denizens of the industry grassroots, they have echoed the Tu Va Stables supremo in extolling the considerable virtues of the Irish EBF Auction Series in terms of prize money, resale opportunities and stimulating activity in the middle-to-lower markets at the yearling and breeze-up sales.

Meade, who recorded a treble on Sunday that included a return to form for 2020 Irish EBF Auction Series maiden winner and subsequent Group 3 victor Elysium in the Listed Irish Stallion Farms EBF Garnet Stakes, had revealed in the Irish EBF Auction Series Shout Out earlier this year that it was the inauguration of the series that prompted his increasing re-emphasis on the Flat sector, having initially enjoyed considerable success on the level before becoming an eight-time champion National Hunt conditioner.
“It’s had a huge bearing on it,” Meade declared. “We found we were able to buy horses of value on the Flat front. We’ve been lucky in the last couple of years so we decided to buy a few more.”
Elysium isn’t even Meade’s star series graduate, with Helvic Dream top of the class having provided the Meath handler with his first Group 1 in the Tattersalls Gold Cup at The Curragh last May.

That came 21 months after the son of Power won his Irish EBF Auction Series maiden in Roscommon, making him the second Group 1 graduate of the series after Champers Elysees, who won the Matron Stakes last year. Remarkably, Helvic Dream led the Johnny Murtagh-trained filly home in a stellar 1-2 back at Roscommon in the Irish EBF Median Auction Race in September 2019.

Ten graduates of the Irish EBF Auction Series have won at group level, four of those at the highest grade and Helvic Dream was the first of a stupendous hat-trick of Group 1 victors in 2021, with the Ken Condon-trained Laws Of Indices (Prix Jean Prat) and Ado McGuinness’ A Case Of You (Prix de l’Abbaye) following in his hooves.
These three were acquired as yearlings for €12,000, €8,000 and €3,000 respectively, highlighting the value that is available at public auction.

This year, the Irish EBF Auction Series comprised 24 qualifying races and two finals worth a total of €699,000 in prize money. With weight allowances dependent on the purchase price, and the ceiling purchase price for which a horse can run set at €72,000, the attractions are endless.
“Lady Of Inishfree is belonging to three guys I’ve been mixed up with a long while: Eoin Banville, Ken Bolger and Peter Parkhill. The idea has been to bring the horses on, make them worth more money and sell them,” explained Meade, who brought his tally of prize money garnered in the series to €212,695 from the 36 times out of 77 runs from his 33 representatives.
Significantly, just short of €94,395 of that tally has come from placed horses. What is also noteworthy is that the average sales price of the five winners that yielded the €128,300 is €12,520, while the average sales price of all his runners is €12,166.

“We’ve had the final in our heads for quite some time with her. I’ve always felt she was very useful. I think she is a stakes filly in the making and I thought if everything went right for her, she would be hard to beat.
“We got beat a short head in it two years ago with Layfayette. Chris Hayes (who rode Lady Of Inishfree) was riding him that day and he just got touched off and the filly that beat him (Lustown Baba) went on and won (and was placed) in two or three listed races the following year for Willie McCreery.”

Banville (Arctic Tack Stud), Bolger (Redmondstown Stud / Spring Field Farm) and Parkhill (Castletown Quarry Stud) are immersed in the racing and bloodstock industry and will be getting the cheque books out once more after their €23,000 buy-back boosted the bank kitty.

“She has more than paid for herself,” said Bolger. “We bought her as a foal for €8,500. Peter did the main selecting. When we returned her as a yearling, we liked her a little bit more than everybody else so we actually bought her back in at €23,000 which looks now a great idea seeing as we grabbed the 70 grand.
“We’re delighted we got the opportunity to enter the series. To get to the final was fantastic. To win it was dream stuff, magical stuff.
“The prize money for the races that come through the season is a great help and gives great incentive for people to go forward and maybe purchase again.
“We purchase every year and it’s always something we keep an eye on because it is a great incentive and a great help to the industry as well. We’ll try line up something for next year again, please God.”

It all speaks to an innovation that has delivered on its key targets and is flourishing with each passing season.
In 2015, there were just 17 qualifiers and the final was worth €75,000. On Sunday, 16 qualifiers battled it out for a share in the €120,000 pot in a seven-furlong final, while there were nine further runners pursuing the €30,000 on offer for an alternative final over a furlong less, with prize money available down to sixth in each contest.
This year, 93 individual horses and 38 individual trainers have won prize money, while 21 horses have won prize money in excess of their auction price, including Lady Of Inishfree, Sunday’s Nursery Handicap victor Admiral D, and a host of the winners.

The average auction price of all runners was €28,817 with the highest at €71,290 (Nectaris) just sneaking into eligibility, while the lowest, at €1,000, was Capitulation, who was among the group winning more than they cost by following up a third-placed finish at Leopardstown with a maiden triumph at Bellewstown. The Ado McGuinness-trained filly just failed to add to the €14,500 gained from the Irish EBF Auction Series, when denied of sixth by a neck in the final.
The good news is that Irish EBF has confirmed its continuing commitment to the series into 2022, ensuring that there is a genuine, credible programme of opportunities with which to attract existing or new owners at public auction, and to encourage trainers to pursue them, safe in the knowledge that their talents as trainers and the wares of their horses can be advertised without having to cross swords with more regally-bred stock.

Nessa Joyce, Irish EBF Manager commented: “The series has gone from strength to strength since its inception in 2015 and this year’s final has provided another fantastic success story. The first six home had an average auction price of just over €26,000 and we are likely to see some of them at stakes level next year, adding to the already impressive Auction Series Graduates Roll of Honour.

“The 2022 Irish EBF Auction Series will again offer new and existing owners a chance to get involved at more modest prices with the potential to reap some of the excellent prize money on offer.”