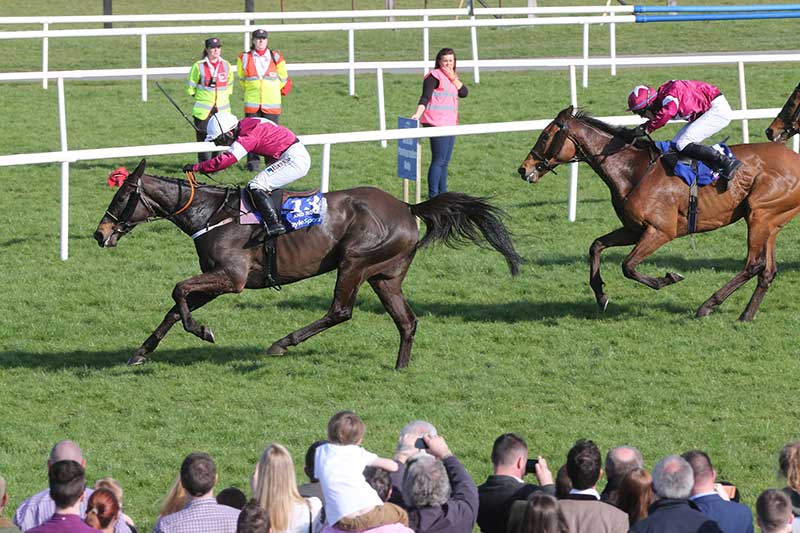 The 2015 Irish Grand National winner and Mouse Morris trained, Thunder And Roses, heads the field for the €100,000 Download the Ladbrokes Exchange App Leinster National at Naas Racecourse this Sunday. The richest ever steeplechase to be run at Naas has attracted a competitive field of 19 runners in which last year’s winning trainer, Jim Dreaper, is represented by Sizing Coal.

Trainer Mouse Morris will have two runners in the race with recent Navan winner, Folsom Blue, joining Thunder And Roses in the lineup.

Morris said; “Thunder And Roses ran well last time and he’s coming back into a bit of form but he has gone up a lot in the weights and has a lot of weight to carry on Sunday. Folsom Blue runs under a penalty for winning at Navan last weekend but we’ll give it a shot anyway and it’s a great prize to be running for.”

Leading Aintree Grand National fancy Ucello Conti is one of three runners in the race for trainer Gordon Elliott who will also saddle Rightdownthemiddle and Space Cadet in the three mile Grade A handicap.

Champion trainer Willie Mullins is represented by Sambremont who will be the mount of Paul Townend, the trainer and jockey combination who teamed up to win the race with Ballytrim back in 2010.

Wexford trainer Liz Doyle will also be seeking to win the race for a second time as After Aspen is her representative this year hoping to repeat the feat of Rich Revival in 2013, while Troytown Chase runner-up Abolitionist would be giving fledging trainer Ellmarie Holden the biggest win in her short career if he can win under Rachael Blackmore.

Ellmarie Holden, trainer of Abolitionis, said; “If he runs the way he did in the Troytown last time out he hopefully won’t be too far away on Sunday. He’s in good order and flying at home and schooling well. I’d say he should be ok on the ground and I’m not overly concerned about it although he is a horse that would probably want a bit of nicer ground, but time will tell.”

Five of the eight runners in the Irish Racing Writers Kingsfurze Novice Hurdle were victorious on their last start with trainer Gordon Elliott and owner JP McManus bidding to make it successive wins in the race, this time with Minella Till Dawn. McManus is also represented in the race by the Joseph O’Brien-trained Outspoken and trainer Willie Mullins is also double handed with Bleu Berry and Riven Light.

Ball D’arc will be favourite to make it three consecutive wins this season when heading the field for the Grade 3 Naas Directors Plate Novice Chase, in which he will take on four rivals, while the concluding bumper will see the impressive Fairyhouse winner Mystic Theatre try to double her tally on the racecourse.

The first race on Sunday is 2.10 and the ground is currently soft to heavy. For more information on the Ladbrokes Exchange Leinster National race day visit www.naasracecourse.com.