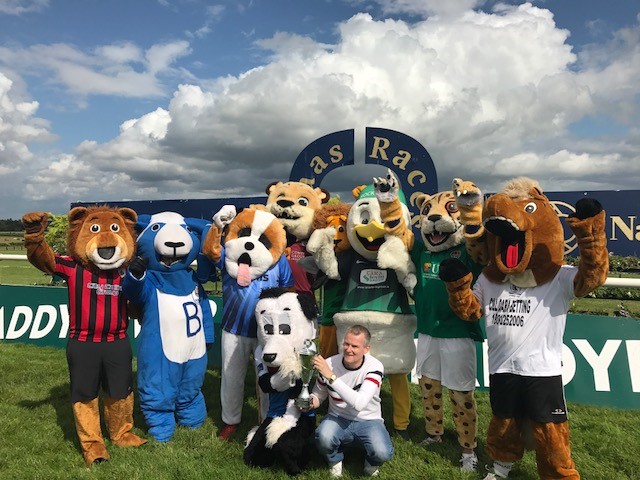 A thrilling renewal of the Paddy Power League of Ireland Mascot Race saw Harper the Dog put in a well-timed challenge to take the contest in decisive style on Bank Holiday Family Fun day at Naas Racecourse.

8 races went to post on Family Fun Day and the feature race went to Auxilia. The daughter of Free Eagle is trained by Ger Lyons and ridden by Colin Keane. After a promising debut at Leopardstown Auxilia followed on to win the Irish Stallion Farms Fillies Median Auction Maiden Race.

Off the track there was plenty of family fun to keep the Kids entertained including bouncing castles, face painting, petting farm and a magic show from Denzel the Magician.

Manager of Naas Racecourse Eamonn McEvoy commented: “We are delighted with how our Bank Holiday Family Fun day went. We had plenty of free family fun entertainment and the Paddy Power League of Ireland Mascot race was an exciting edition to the day. We had some noteworthy winners on the field and we look forward to seeing them progresses in the near future.”

The next raceday at Naas Racecourse will take place on Wednesday 18th September a midweek meeting with a special offer in the Panoramic Restaurant. For more information visit www.naasracecourse.com.