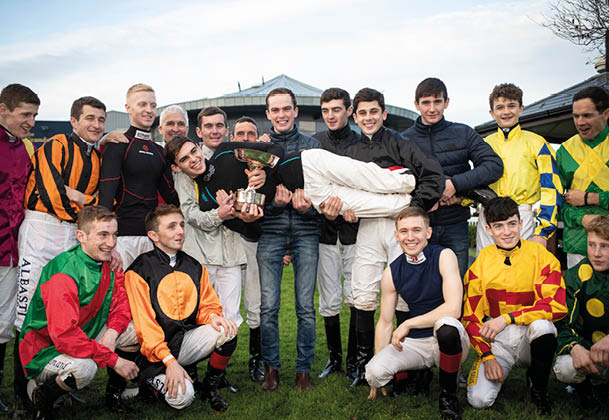 In a season that saw two jockeys record a three-figure tally for the first time, Donnacha O'Brien is once again the Irish champion jockey.

The 21-year-old retains his title in a year when he added to his Classic haul in the QIPCO 2,000 Guineas on the Aidan O'Brien-trained Magna Grecia. At home, Donnacha won the Group 2 Beresford Stakes on his father’s Innisfree and the Group 2 Kilboy Estates Stakes on Red Tea, trained by his brother, Joseph.

Broome, Mohawk, Latrobe, Buckhurst, Waitingfortheday and Blenheim Palace were domestic Group 3 winners for Donnacha who ends the season with a total of 111 winners in Ireland, matching last year’s winning tally and beating the 2017 champion Colin Keane by eight. Keane’s highlight was his Group 1 success on the Ger Lyons-trained Siskin in the Keeneland Phoenix Stakes at the Curragh in August. He reached the 100-winner mark at Navan on October 23, O’Brien achieved the same feat at Gowran Park nine days earlier, and it is the first time that two Flat jockeys have reached a century of winners in the same season.

The apprentice championship went down to the very last race of the season at Naas this afternoon and success on the Dermot Weld-trained Maria Christina saw Oisin Orr, who rode two winners on the day, draw level with Andrew Slattery to share the spoils with 43 winners each. It was a second apprentice crown for the County Donegal rider and a first for 18-year-old Slattery who hails from Killenaule, County Tipperary. Both jockeys rode their first Group race winners this season and they finish clear in the table from last season’s champion Shane Crosse and Ben Coen, a cousin of Slattery’s. In 2010, the apprentice title was shared by Joseph O'Brien, Gary Carroll and Ben Curtis.

For the 22nd time in his remarkable career, Aidan O'Brien was crowned champion trainer. The Ballydoyle maestro, who turned 50 last month, won the Tattersalls Irish 1,000 Guineas with Hermosa and the Dubai Duty Free Irish Derby with Sovereign and enjoyed further success with Magical whose Group 1 haul included the Tattersalls Gold Cup and the QIPCO Irish Champion Stakes. Fairyland and Love, winners of the Derrinstown Stud Flying Five Stakes and the Moyglare Stud Stakes respectively, were other domestic Group 1 winners for the Ballydoyle trainer.

Mrs Sue Magnier is Ireland’s champion owner once again. Mrs Magnier just got the better of her fellow Coolmore partners Michael Tabor and Derrick Smith to retain the title.

Brian Kavanagh, Chief Executive of Horse Racing Ireland, said: “Each of our winners is a terrific ambassador for Irish racing and I wish to congratulate the champions we have crowned today. I wish to give special mention to the jockeys that have served up a thrilling conclusion to the season with the championship going down to the final days of the season and the apprentice championship going down to the very last race.”